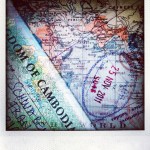 Have I mentioned lately how much I love what I do?  ‘Tis the time of year when I received one of my most coveted press passes…a pass that leads to planes, trains and automobiles (river boats and luxury cruise ships) as well as every continent on earth.  The New York Times Travel Show consistently satiates my wanderlust!  It is a three day feast with photography of the most beautiful sites on earth, music, art, dance, cuisine and some of the best travel adventures offered at discounted prices.

Walking through the exhibit floor, I tasted bubble tea, learned how to salsa with Danza Fiesta, heard the spiritual sounds of the Himalayas from Sonam Adventures and received a sample of a new product, “LiveLeaf Traveler Protect and LiveLeaf Traveler Rescue” which provides “fast, natural relief from digestive distress”. Christmas came early! Seriously though, this company has also developed a program called “Lifedrops” dedicated to saving children’s lives by reducing the burden of diarrhea in developing third world countries and have very interesting technology behind their products. I will let you know if it is yea or nay on my upcoming trip abroad.

Some people speed date, I speed travel! Delving into  intimate details,  one exhibit to the next, I gathered every brochure, postcard and pen in site.  This time around, the Asian continent won my heart.  I want to walk (and dance) along the Great Wall of China, photograph the world’s oldest and most historically important trade routes known as The Silk Road and not just watch the wonderful PBS documentary entitled, “In the Footsteps of Marco Polo”.  I want to explore Malaysia with a video camera showcasing  their healthcare and be one of the many tourists now allowed into Myanmar.  If exotic and far off places are calling to you but a fear to explore on your own is holding you back or if you realized that some of the most memorable moments of travel are when one goes off the beaten path with the locals then Tours by Locals.com  should be your next click on Google!

Armed with the maps and collages of my dreams, I then spent the afternoon in the travel seminars taking in the sage advice of experts in the travel field.  The Frommer’s revealed their top destinations for 2014.  Joseph Rosendo, award-winning travel journalist and Emmy-winning director, had an eloquence that wove together philosophy, mysticism, reality and a La Joie de Vivre! Joseph captured the soul of many beautiful places around the world. Having been in India, I sat in full agreement with him when he described this land in the following way: “India is waiting to grab you with its color and humanity. It shakes you up and delivers gifts. It is a constant invitation to live with joyous , unexpected life changing experiences around every bend.” Andrew Evans , National Geographic’s Digital Nomad,  detoured from the common held creation of a “bucket list” but rather suggested that, “Travel shouldn’t be a list we are working through but rather it should be a constant surprise!” “Spontaneous moments occur when we put ourselves out there and let things happen!”  He spent 300 days on the road last year and had amazing stories about moments…still, adventurous, scary and beautiful.  These moments are creating a life so well lived.

Mr. Rosendo began his talk with something I will use to end this piece.  “If one advances confidently in the direction of one’s dreams, and endeavors to live the life which one has imagined, one will meet with a success unexpected in common hours.” (Thoreau).  The New York Times Travel Show establishes the path of beginnings; beginnings of dreams to travel, to gain wisdom and insights about the world  and in my case, to photograph. If held close, then I think we will live a life far greater than we could have ever imagined. 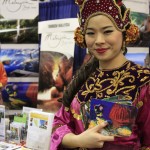 Receiving a press pass for the New York Times Travel Show this past weekend was similar to receiving the “keys to the kingdom”!!! One could meander through aisles and experience continental wonders …beautiful colors and vistas, music and food from culture after culture. If one wanted to know when Cuba would be open to travel or how to plan an African Safari or how to make the most of social media while on a trip, the New York Times brought in many famous speakers to address these topics. Arthur and Pauline Frommer offered their sage wisdom on how to offset the high cost of airline tickets by choosing alternative lodgings of private homes and apartments which could lead to a much deeper experience of place by immersion with local people and hundreds of dollars in savings. www.airbnb as well as www.wimdu.com. Pauline suggested booking 4-6 weeks before departure and doing this on either Tues. or Wed. rather than the weekend. In order to find reduced rates, follow airlines on Twitter around 11 am because they are trying to compete with Expedia etc. and will offer very special rates for a few hours to those that are following them on social media. Non direct flights as well as 2 one way tickets could be cheaper in cost. Autoslash is an excellent site to provide lower car rental costs. They will make bookings for each client and if the cost drops, they will send out an email. SeatGuru is the ultimate source for determining if premium seating on flights is truly worth the cost. They also suggested contacting ethnic travel companies in order to experience the culture more directly. Global Greeters connects locals who are very happy to provide tours of their homeland for free.

Samantha Brown reminded us all of how important it is to be flexible and to know the key words of “Hello”, “Please”, “Thank You” in the country you are fortunate enough to be visiting…”better to butcher a language but to show you are trying to make the connection.” Travel is so much about getting past the picture postcard image and connecting with the people. She also suggested visiting the local market for a very quick language lesson by reading the signs and becoming familiar with the types of food in that locale.

.My day ended with a conversation with Mark Murphy, the author of “Travel Unscripted”. He is a 20 year travel veteran who shares his first hand extraordinary experiences in this new book. To quote Rudy Maxa from public television, “Mark Murphy brings a conversational voice, an impertinent ‘tude’, and a wry eye to life on the road.”

So here I sit, surrounded by beautiful photographs and brochure after brochure offering very enticing offers. I am off to Europe this spring and then who knows…it is all so captivating!