Men and Women across our country came together today to speak messages of change, inspiration and hope. May the young girls of today facing their future as strong women of tomorrow, benefit from those who came before and paved the way for equality, justice and respect.

Who Shall I Become? 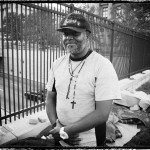 The weekend was one that just called out to leave behind that “To Do” list and go photograph. So off with a friend to downtown Philadelphia I went. Our GPS was set to the fountains in the center of the city and then on to capture the skyline from the Camden Waterfront. As a photographer, I try to heed the sage advice to be open to take in subjects from different vantage points…above, below, behind and basically any other way I can contort my body. So while I was at the fountains, I looked around to photograph from another direction and I was drawn to an American flag supported by boxes and blankets on the overpath of the expressway. I wanted to see more…here in Philadelphia, there is a heated debate regarding a mandate not to feed those who are homeless outdoors. Many would see this as just a way to make our homeless population more and more invisible. I wanted to see who was so proud of our county while living in cardboard boxes. It was then that I met Carlos. We talked for a long time and he shared that he had lost his job two years ago and then had major health problems the next year which caused him to loose everything he owned. Carlos said he tries to make the best of everyday and look for the good. “It’s my choice and it helps me with this time.” He is sleeping over the Vine Street expressway and he told me he doesn’t notice the noise, just the stars!

We then went off to the Camden Waterfront. There was a surprise fireworks show and Andrew, another photographer hunched down and off to the side. He was outgoing and began sharing how much he loved that spot to photograph. We learned that Andrew was studying to be a meteorologist even though many told him he wouldn’t be able to succeed due to his Asbergers. He was also gay which added to his struggle for acceptance. Andrew told us how he saw beautiful angels and was then put in a psychiatric ward but another man his same age saw angels and was put on Oprah! Andrew was a gentle soul in the night.

Following sage advice trying to look in other directions, I met Carlos who reminded me not to take all that I have for granted and try to make the best of everyday which I will remember when I get back to my mundane “To Do” list… and Andrew who I hope really did see angels.