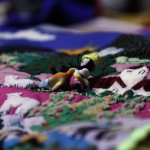 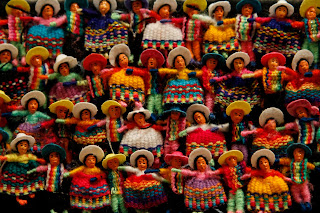 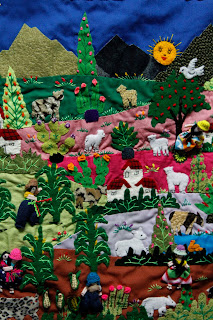 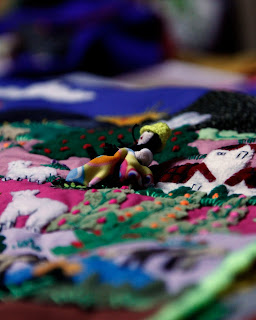 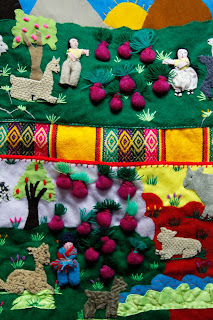 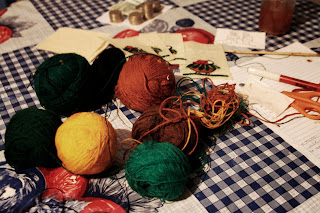 In 1973, General Pinochet led a coup against the democratically elected Marxist government in Chile. His army went after tens of thousands of people believed to be subversive and a threat to his policies. These mothers, fathers, sons and daughters were publicly executed in the national football stadium while others were imprisoned, tortured or simply disappeared. Families were torn apart and basic survival became so very difficult. The majority of women had husbands who had disappeared or were murdered and for the most part, were viewed as passive and unimportant by the government… but they were anything but! In 1975, Arpillera (pronounced as ar-pee-air-ah) workshops were started by the Vicariate of Solidarity which operated under the protection of the Catholic Church and were basically left alone by the Pinochet government. Women just doing women’s work! Arpilleras are hand sewn and embroidered 3 dimensional tapestries. They became as Anna Burroughs called them, “Threads of Resistance, hand-stitched works of hope and protest.” She went on to state, “The arpilleras were often made from clothing of the disappeared and the names of missing loved ones can be found on some pieces. Other sewn words and expressions were simple protests: Dόnde estás? Where are

you? The censorship that characterized Chile under Pinochet’s dictatorship defeated written words that opposed his regime. The handwork of the arpilleristas testified for the oppressed and detailed the struggle for truth and justice despite the suppression of the military government.

The arpilleras were made during clandestine meetings in dark basements or churches. The sewn testimonials of suffering were sold by the women so that their messages were released into the world and so they could feed their families.”

Later, the arpilleras began to depict the women’s dreams for peace and happiness. What began as a way to honor and remember loved ones now served as a catalyst to empower women socially, politically and economically. Workshops continue today throughout Chile and Peru. In Villa El Salvador, I experienced and was humbled by the love and dedication of women who are determined to provide a better life for their children through the sale of their exquisite arpilleras. In the book, “Half the Sky: Turning Oppression into Opportunity for Women Worldwide” Nicholas Kristof and Sheryl WuDunn state that “Masculinity expresses the idea that there are things worth dying for while femininity expresses the idea that there are things worth living for.” These women are dedicating their lives to things worth living for – health care, nutrition and education for their families.

In the next blog, I will make the introductions!