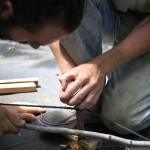 This week in the mail, I received my annual copy of “Southern Exposure“.
Snow is forecasted. Super Bowl festivities are underway and I am remembering a time 2 very hot summers ago. I met a woman who was weaving hammocks at the Kutztown Folk Festival. While I was photographing her art, I was curious about her background. She related that she lived at Twin Oaks Intentional Community (modern name for a commune) in rural Louisa County, Virginia. I was intrigued – what would make people choose this lifestyle? After several phone calls back and forth, Paxus Calta (Earl Schuyler Flansburg) invited us into this lifestyle. I travelled down with my friend Ann Lauder who is an excellent writer. I would photograph and she would tell the story.

Twin Oaks is referred to by the 100 residents as an ecovillage and intentional community. It was started in 1967 by psychology students studying “Walden Two”. Homes can have up to 26 members and possessions are shared to promote the greater good of the society. Clothes, underwear and shoes can be found in “Commy Clothes”. There was definitely a musty odor but certainly variety! Clothing can also be optional. Each member, whether married or not, has their own room. Bathrooms are open to all, locking doors is frowned upon. Unconventional and alternative lifestyles are as readily supported as conventional lifestyles. This is not a religious community and all denominations are welcomed. There is car sharing and chore sharing, all very organized. Each member is asked to give 42 hours of service each week. A few examples are: washing dishes, child care, gardening or working in one of the three multi-million dollar companies the community owns. Twin Oaks sells hammocks, tofu, and heirloom seeds. For the work, a monthly stipend of $80 is provided. Residents are provided with all the basic necessities of food, shelter, health care, child care and education. Decisions must be made by the entire community, even as far as deciding if someone can get pregnant and bring a child into the community. As much as possible is recycled. There are areas that appear to be filled with junk, but the items are just waiting for that creative touch. Even fecal matter is recycled into green energy. More and more, members are trying to live off of the grid and rely on solar energy. The majority of what is eaten is grown or raised right there. Cows, chickens and gardens supply members with a variety of food. Some members left Twin Oaks and began “Little Acorn”. It has fewer members and decisions are made by the majority rather than the entire body. The focus of this community is on harvesting heirloom seeds for their “Southern Exposure” company. Gardens are totally organic and they make sure that the quality of the soil is preserved with absolutely no genetic engineering. What are the positives of this lifestyle choice? In this economy, people do not have to worry about bills, shelter/food and loneliness. There is individual freedom in choosing how to spend time and what to work on. Residents can take pride in decreasing their carbon footprint. The negatives expressed had to deal with the lack of funds limiting the freedom to travel and the difficulties which can arise when relationships do not work out in such close quarters. While television is not allowed, access to the internet is. New members are now coming with lap tops and spending more time on their own rather than in community as it was before this technology arrival. While older members have been there for decades, younger members seem to stay only a few years and move on. Some said they came to learn entrepreneurial skills with the hope of leaving to start their own organic farms or small businesses.

We met a son of a former CIA agent, a former buddhist monk, teachers, artists, true hippies, political activists and those so very concerned about what is happening to our environment. In the rural hills of Louisa, Virginia one may definitely come across that “road less travelled”.