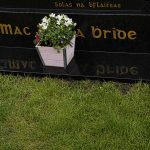 While I was in Ireland, I was fascinated with all things castles, cottages and cemeteries. They hold the spirits of greatness, intimacy and connections. Since my DNA was gifted to me from those born in Ireland many years before, there was a strong pull to the cemeteries. (It is said that my ancestor was King Brian Boru but I will save the castles for another time!). The cemetery was where I could stand on the dark sacred ground joined in some way with those who came before me. In quiet, I could connect and try to hear the stories being whispered into my soul.

On our first full day in Donegal, the rain was pelting and pouring down with the wind whipping. We were staying with Joe and Noreen McFadden, two of the most wonderful people you could ever meet who could write the definitive book on Irish Hospitality As A True Art Form! They told us that this was Cemetery Sunday. A first for me since I never heard of it before growing up in the states. Throughout Ireland, each Catholic Church that has a cemetery attached chooses one Sunday in the year to hold an outdoor mass and those with deceased family members buried there come together to honor, remember and reconnect. Did we want to come? I couldn’t think of anyplace I would rather be!

The teeming rain was no match for the love and dedication of the people. Cars were backed up for miles to park. Once in, the greyness of the cemetery was enlivened with the colors of flowers and umbrellas. Each person would decorate the family grave and stand by the headstone during the mass. If someone knew that a family member would be away and there would be no one to tend to a grave, others made sure they would decorate and stand in. The beautiful bouquets were not only in the flowers but also in the offered kindness of others. Through the music, prayers and affection shown, this bit of earth was transformed into a sanctuary of an invisible, unending communion. The cycle and connectedness of life were palpable as the fathers’, mothers’, sisters’ and brothers’ stories were told and as the living stood with the dead.

All during the mass, people were huddled together in support and then gathered together after it was over. As I was photographing the groups of people, I looked up to see a young man who had walked up to the end of the cemetery. The wind and rain were pelting but he was just looking out onto the sea, alone with his thoughts. It was all so striking to me…the rhythm of accompanying and letting be, the need to gather together and then the need for each person to go off and in the aloneness, try to hear the love being whispered into their soul. I had never experienced anything like it and yes, there was no other place I would have wanted to be.

PS…Lorla and James, you could also co-author the book! Heartfelt thanks!