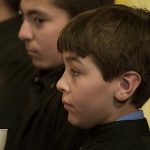 From darkness into light…from monochrome into vibrant color… from winter into spring, an emerging opening and flow rather than a fighting. There is a gentle stirring of one’s spirit with words like hope, light and resurrection because they emerge from a dying. Intertwined within this are rituals and traditions which ground us, give meaning and create bonds of friendships and identity.

In the Greek Orthodox religion, the Easter season is one of the most profound and holiest times of the year so I decided to experience and get a glimpse into the rituals and symbolism of the Good Friday service. First, when I walked into the Annunciation Greek Orthodox Church in Elkins Park, PA, the 6th oldest Greek Orthodox community in the US, established in 1901, I was struck by the hospitality and warmth of the women who welcomed me. I was a stranger and they wanted to make sure I felt comfortable, giving up a front row seat for me, explaining what would be happening. This hospitality was as beautiful as the gold Byzantine icons surrounding me. There was a sacred richness mixed with that Greek love for life and I was totally caught up in it! A key for me was when I couldn’t tell which child belonged to which mother…all the women there were their mothers, hugging, kissing and tugging on clothes and fixing hair. I need more Greek friends!

In the front of the church was a richly decorated and elaborately carved canopy called a Kouvouklion which represents the tomb of Jesus. The women had spent over 3 hours that morning decorating it with spring flowers of white, red and purple. The ceremony began with readings from the bible, ethereal chanting from the cantors and incense flowing freely to remind everyone that their prayers flow freely to God. Then, gathering around the image of Christ on the cross, the men reached up to take away the nails while young girls (representing the women at the feet of the cross) held the white cloth waiting to receive the wooden representation of Jesus in death. It was then taken behind one of the three doors separating the nave from the sanctuary and referred to as the Iconostosis. An elaborately decorated tapestry with the image of Christ prepared for burial, referred to as the Epitafio, was then brought out and carried around the church as all present bow in veneration.

After it was placed on the Kouvouklion, people young and old then began to line up with gestures symbolizing a deep and abiding faith. The sign of the cross was made followed by bowing to kiss either the feet or hands of the icon. The priest stated the generally, one does not kiss the face of the icon. Once again, the sign of the cross was made and then many people got down on their hands and knees and crawled through the bottom of the Kouvouklion to symbolize their willingness to enter unto death with Christ.

These rituals become the pathway to enter into a mystery of God and visibly show a faith and belief. Even though there are many paths, an abiding commonality is that there is hope in the face of fear, that there is life in the face of death and that love holds us, heals us and carries us forth to ignite the world with kindness. I am so glad that I stepped into this new experience and am so grateful to all the women who so graciously gathered around me and made me feel at home and to Fontina Moller who first taught me the meaning of Opa, I held you in my heart as I walked through your church. Now on to Easter!