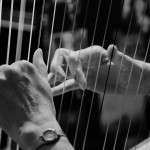 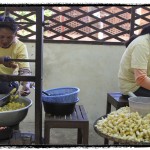 On this rainy day in Philadelphia, I was going through my photographs and was drawn to the artists… those I met who brought color, soul and beauty into the world. Some were carrying on generational traditions. Some were doing it for survival while others just felt the need to share a gift and vision.The Italian street artists, the young girls who coax the very fine silk threads from cacoons in Cambodia and the Indian men who hand print designs on material…these are the transforming magicians who give the traveler another connection with place, spirit and people to cherish and remember.