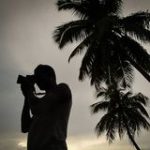 As photographers, we attempt to freeze moments in time…to try to hold on and connect with the people, the places and the feelings forever. We fight hard against the inevitable fate of endings and goodbyes. We constantly seek the light and examine the way it kisses everything on earth. I am writing this today with tears in my eyes and such sadness in my heart because I wasn’t able to stop time for a great friend and photographer and the light has dimmed. Conrad Louis Charles died suddenly last night due to complications from a surgical procedure.

Conrad and I met after I saw his work featured on Tewfic El-Sawy’s blog The Travel Photographer. I was so impressed and knowing we were both from the same area, I contacted him and we quickly became fast friends, living only minutes from each other. Conrad was the gentle giant. He had quite the presence in stature but was quiet by nature. He was deeply introspective which led to his unique and profound vision. This master photographer was always thinking about interactions and
interplays of life and Conrad could tell me every spec on the cameras and what would work for what. We would spend hours lusting over the latest gear and the places we could travel to with it. I would see the big picture while he could see the small details. We worked so well together. Conrad was moving into film making. That was his dream and everything he did was to learn more and to be more. We talked about the projects that took hold of his heart. He hoped to travel to Brazil for a few months, live with the local people and travel with them on their pilgrimages, documenting their faith and rituals which would add another component to his beautiful and sacred still images. I always was in awe of how he was able to take his 6 foot plus self and get so close to people to capture with intense intimacy their deepest moments in prayer without in anyway being an intrusion. I will never be able to do what he did even though he kept trying to teach me! I remember telling him how I was trying so hard to emulate him by photographing a couple at a restaurant but all I got was a hand signal recognizable around the world and it wasn’t good! Conrad truly just had a way and a style that was uniquely his. Hours would go by and we would consistently close our favorite restaurant as he shared his vision of documenting the events at the border between Haiti and the Dominican Republic. Both places were home. With ancient roots stirring the rhythms of connectedness there, he felt a deep calling to tell the stories of the people and the politics. Dreams are those intangible life/light giving graces. Conrad may not have seen the completion but he put the spirit of his dreams into the universe for another to hold it close and carry it on. Conrad was such a compassionate, gifted and sensitive visionary. He first touched my life with his images and then grew to profoundly impact me with his supportive friendship and mentoring. The space between us had been blessed. I will forever miss that wonderful deep voice calling me “Frances” rather than Francie. When he spoke, he honored. His curiosity and adventurous spirit led him to travel the world and come home with fascinating stories of other cultures that I could sit and listen to forever. He would do anything for the photograph. In Antarctica, the seas were thrashing and crashing. Many on board were sick. Conrad was just not happy that he didn’t get the type of shot he wanted so he asked to stay on the ship and go back again despite the horrible conditions. The second time was a charm. He regretted not being a doctor at times, but he healed with his presence. Conrad deeply loved his family and I will hold close the rosary that he brought back for me from Fatima recently. He was so excited to take his mother there for her birthday with his sisters.

Pilgrimages always fascinated him…what was it that drew people to leave home and go on a journey with such deep faith… to enter into the unknown in search of mysteries and miracles that lie beyond us.

Conrad, may the pilgrimage you are now on bring you to a place where there is no more mystery. May you feel the welcome of perfect peace, light and love.
I am not able to stop time for you, but you will forever live in my heart. With the words we always spoke when parting, “Go gently my friend! I love you!”

I am so very happy that I have bragging rights…bragging that I am able to call Conrad Louis-Charles my friend. Several years ago, after seeing a very compelling image of an Indian man I just had to write to the photographer to tell him how striking I thought his work was. The planets were aligned…or as luck would have it, Conrad lives 7 minutes from me (we actually timed it due to a deadline!). He is so very gifted.. a master of capturing such intimate moments enhanced by exquisite lighting. On Saturday, the New York Times recognized his talent and gave him a coveted spot for a portfolio review. Only 160 photographers were chosen from over 2700. He has covered the devastating effects of the recent earthquake in Haiti, walked with religious pilgrims in Brazil and his photographs draw the viewer right into the moment and mood. His website is a work of art not to be missed. Congratulations my friend! Such a deserved honor!