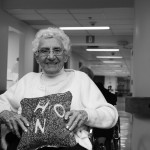 Twenty years ago, a courageous Sister of Mercy felt called to create a center…a center which would speak of wellness for those who had little hope at that time for something so elusive. Sister Bernadette Kinniry and Fr. Don Reilly established Siloam, a sacred space welcoming those with HIV/AIDS. Given the historical context, they were treading in uncharted waters, offering holistic programs integrating the mind, body and spirit. People from all walks of life who were often shunned and touch being forbidden, discovered an oasis of true acceptance and respect in Siloam and graced Bernadette and Don with their presence. This founding charism has been a constant through the years.

I have had the privilege of also feeling great acceptance… as a stranger with a camera, I have been graciously welcomed in to capture very intimate and personal experiences. Over the past few weeks, one undertaking I photographed revolved around people who have never met but yet are uniquely connected by a spirit of support and thanks. Before the Philly AIDS walk, Sister Bernadette put in a call to McCauley Convent, the retirement home for the Sisters of Mercy. She simply asked for prayers from the older and infirmed nuns but they decided to give more. With wheelchairs and walkers, the sisters did their own AIDS WALK around the grounds to raise money for Siloam. Weeks later, scissors, paper and material in all different colors and textures were laid out on tables in Siloam and people started to design, cut and sew together pillows of comfort and gratitude for the nuns. From one hand to another… from one heart to another, I was able to photograph a true celebration of what I think Thanksgiving is all about.

I am sincerely thankful to so many for allowing me to share in such special moments of life. 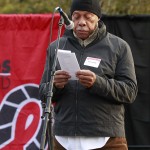 This time last Sunday, I was returning home from the Philly AIDS Walk. I am working on a long term project which required me to photograph this event. It was the first time I attended and was totally impressed by the number of people who joined together to walk and run in order to support those touched by HIV and to help fund further research. I could have easily spent the majority of my time photographing this expansive sea of humanity but I chose to photograph from a different perspective.

Those with cancer may say, “I have cancer.”

While AIDS seems to consume one’s identity. When asked, most respond with “I am HIV positive.” As if they are the disease. So I decided to forego the larger picture and honor the individual. I walked through the crowd to capture the moments of strength, support and reflection.