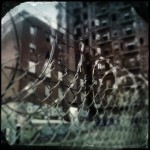 After photographing at the Mummers’ Parade last week and spending a great deal of time on Braod Street, I thought it might be interesting to photograph the architecture along this most famous street which spans approximately 13 miles. Broad Street was one of the earliest planned streets in the United States (1681) and has a spot on the National Register of Historic Places. The most prestigious art centers, sporting complexes and historic architecture line this street.

The Divine Lorraine Hotel, located at the corner of Broad and Fairmount Avenue, was built in the late 19th century. This building initially symbolized opulence and luxury as a 246 room high rise apartment building with 2 ball rooms, in house staff and one of the first elevators in the city. It later became home to Father Divine and his congregation and was noted as the first integrated hotel in the city. Those wanting to join this religious cult turned their savings over in return for a room and had to abide by Father Divine’s strict rules. Richard Nickel posted a fascinating look at the history of this building, its inhabitants (Jim Jones was a member before starting his own cult which later committed mass suicide) and photographs of the interior of this now deteriorating and gutted building. A great friend and photographer, Conrad Louis-Charles shared one of his favorite quotes with me before I went off to shoot. “Don’t shoot what you see, shoot what you feel.” (David Alan Harvey). Taking this advice to heart, I went off to capture this boarded up, graffiti ridden shell as it now stands decaying. I am not sure what will become of it since it was just purchased by developer Eric Blumenfeld. He plans to convert the building into rental units with restaurants on the ground floor. May his vision come to fruition.