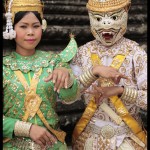 Yes, I will admit it – I have and use a vision board… a huge board with no white space left since it is entirely covered by the places around the world I hope to travel to. It is constantly inspiring and calling to me, “Wander in Wonder!” (I am going to start selling T-shirts with that slogan! Let me know if interested!) When I began this “VB”, Angkor Wat was my very first image. I was so taken by its ancient beauty, its dance with nature in a far off exotic land. Built in the early 12th century in the classical style of Khmer architecture by King Suryavarman II. It is considered to be the largest religious temple in the world. Angkor Wat has become the recognized symbol of Cambodia with a depiction on the country’s flag. I can remember very clearly the exact moment when we came around the bend and I saw it for the first time. It took my breath away… I was finally here! Words for these moments are so inadequate because it is truly a moment for the heart and not the mind.

I came to learn of a mystery that exists and presently has many learned men and women trying to unravel. As stated on Devata.org researchers are exploring the question: “Why do images of powerful and creative women dominate the largest religious monument on Earth and what did they mean to the Khmer rulers, priests and people?” Within the temple, there are 1,796 sculptures of women realistically rendered in stone. Some are dieties known as devatas and others are apsaras known as the sacred dancers to the gods. I was amazed by the preservation of these beautiful images over centuries and the unique differences in facial characteristics.

Even though many questions still remain regarding the extent of the feminine forces in the design and empowerment of the Khmer society, as Devata.org puts it: “Many women of Southeast Asia are still blessed with the feminine beauty, power and spiritual harmony that the ancient Khmers honored.” “We have only to look and continue trying to understand” and I might add, live out dreams!