Time for a Tiara From One Princess To Another Tender Moments Between a Mother and Her Daughter The Teacher and The Student The Candle and The Veil

One would think there would be no common denominator to speak of with regards to a haunted house, a Hare Krishna Temple and a 100 year old princess but that is what makes sharing people’s stories so fascinating. Here is just the overview.

On Halloween in the year 1914, Ethel Marberger was born and her years have not been dull! Her life on 2nd and South was an advantaged one with her family controlling a large portion of real estate. She grew to be an accomplished artist creating beautiful Chinese watercolor paintings. Ethel met and married a man who was a leading Zionist and had just escaped capture by the Nazis in Europe before coming to the US. They raised four very accomplished children…Aladar was a major art dealer in New York City but unfortunately died of AIDS at a time when it carried a heavy stigma. Their daughter Elaine, now known as Davishakti, has lived over 40 years in India and is held in high esteem in Vrindavan at the Hare Krishna Temple. John became a doctor and Donna is a fashion designer living in California with her own line of yoga and travel wear called “b”.
So here we are, Halloween 2015, and all have come to celebrate 100 years of life with this feisty and loving artist, wife and mother. The nursing home transformed into a haunted house while Ethel was transformed with tiara and feathers into a princess. Her hand was tenderly held by her “boyfriend” Winnie as so many well wishes greeted her. A century of life definitely calls for more than one celebration so the next one was at the local Hare Krishna Temple where Davishakti was asked to teach the devotees. I have had the good fortune to photograph Ethel for the past several years for a piece regarding aging with grace and dignity. I have come to know her immediate family well and am now looking forward to the next celebration this weekend for many other family members and friends. One can never have too many parties for a woman reaching 100 and one can reach 100 by being surrounded by family, friends and love. 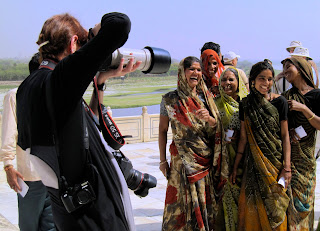 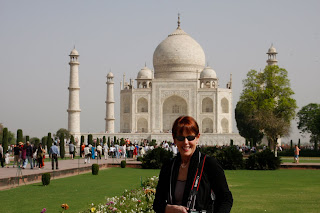 The synchronistic events in life always amaze me…while getting ready to travel to India with so many restrictions on luggage, I was trying to figure out how to pack all of my camera equipment and still be able to have more than just a toothbrush?! And then an answer… the Today Show presented “b” by donna m as the best clothes suited for women who travel. 5 pieces that fit into a zip lock bag, never wrinkle and can be combined to make countless outfits!!!! The bag fits into a carry on and when luggage is lost, life can easily continue. I contacted Donna right away and she is as nice as her clothes are beautiful! I wore them all throughout India. They are so lightweight (dries easily when washed), soft (feeling as if you could live in these 24/7) and versatile. The temperature was over 100 degrees and many temples require women to wear a covering for head and arms…the clothes transformed perfectly and were so light in the heat enabling me to easily move from one camera to the next. For women who travel, “b” merits nothing less than the highest praise!

PS…From a chapter in the world is such a small place, Donna and I, during the course of our conversation, realized that we grew up 5 minutes from each other and I was able to spend an amazing day with her sister who has been living in India for over 30 years! Three weeks ago, we were total strangers. Life works in amazing ways bringing people in just at the right time!