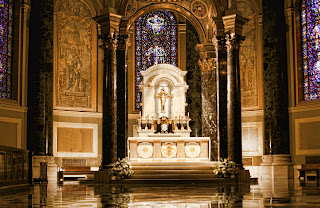 According to Webster’s Revised Unabridged Dictionary, the Sabbath is defined as,” A time of rest or repose; the intermission of pain, effort, sorrow or the like.” “One day in seven appointed for worship.”
Religious freedom was the basis for William Penn’s “Holy Experiment”. As an ardent believer in this human right, Penn asked for and received a charter to establish the colony of Pennsylvania. It would serve as a sanctuary for those of many faiths and beliefs. In France, the observant philosopher Voltaire stated, “William Penn might with reason, boast of having brought down upon earth the Golden Age, which in all probability, never had any real existence but in his dominions.”( http://www.quaker.org/wmpenn.html )
As an on-going project, I will be photographing the many churches, cathedrals and temples located in and around Philadelphia in order to showcase both beautiful art and the diversity of spiritual beliefs.
The Cathedral Basilica of Saints Peter and Paul is not only the largest Catholic church in PA., but it is also the largest brownstone structure in Philadelphia. Built in 1864, Bishop Kenrick called upon the designer of the Philadelphia Academy of Music, Napoleon Eugene Henry Charles Le Brun. With its majestic façade, vaulted dome, ornate main altar, eight side chapels and main sanctuary that comfortably holds 2,000 worshipers, the Cathedral-Basilica of Saints Peter and Paul is one of the most architecturally eminent structures in the city of Philadelphia. It was designed in the Roman-Corinthian style of architecture and is modeled after the Lombard Church of St. Charles in Rome. Its Palladian façade and aqua oxidized-copper dome draws from the Italian Renaissance and the interior is spacious with an oversize apse of stained glass and red antique marble in magnificent proportions reminiscent of Roman churches. It was largely decorated by Constantino Brumidi, who also painted the dome of the Capitol in Washington. In order to protect the stained glass windows, the builders would throw stones into the air to determine the height of where the windows should be placed. Under the main altar, is the compact ‘Crypt of the Bishops’. The Cathedral is listed on the National Register of Historic Places in Philadelphia.
http://en.wikipedia.org/wiki/Cathedral_Basilica_of_Saints_Peter_and_Paul,_Philadelphia