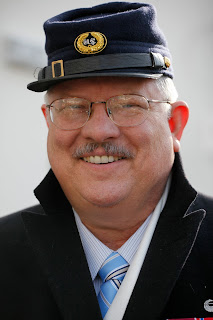 After photographing during a tour of Laurel Hill Cemetery several weeks ago, I was asked to come back for the New Year’s Eve celebration in honor of General George Meade. December 31st was the day of beginnings for him – his birthday and his wedding day. Over 300 people attended this grand celebration to honor Philadelphia’s Civil War hero. Many attendees came in period dress and served as “living historians”. Major Charles Meade, a direct descendant, was instrumental in providing the headstone for the previously unmarked grave of General Meade’s mother, Margaret Coats Butler Meade. This dedication was then followed by a ceremony at the gravesite of General Meade. Speeches were made by members of the General Meade Society, the Union League of Philadelphia, and the Allied Order of the Grand Army of the Republic. The Philadelphia Brigade Band performed and the music echoed throughout this National Historic Landmark. A champagne toast and a luncheon was the wonderful finishing touch to this event!